Someone I like great deal was hurt today by my anger at his party. He’s a good man and a much needed engager in this community but I stand by what I said. The Conservative Party of Canada has creatied an environment of racial intolerance, hatred , and division. Today two candidates , one liberal and the other conservative, had their signs defiled by racial hatred and I pointed the finger for creating the environment where this could happen squarely at the source. The Progressive Conservative Party of Canada and the their leader Mr. Harper.

My friend wrote this:

“Take a look at a few of the hot button issues:

1.       Second class citizens- this is a media interpretation and used as hyperbole by other parties. If you take issue with parts of the bill then go after them but do not use such a general phrase for changes to a bill that is so complex.

2.       Conversion therapy- vetting over three hundred candidates is less than a year is complex process. He was removed as a candidate as was appropriate.

3.       The Niqab has been a highlighted debate by the media but let’s not forget, the court ruled on this. It has been named unlawful and is the reason that such checks and balances are in place.”

I can’t agree with his interpretation here and I want to outline exactly why I disagree with his take and why I  blame the growing climate of intolerance on the actions of the leader and the PC party.

Over the course of this very long campaign what have we heard from the Conservative party week after week?

So we take all of these and the PM’s use of the phrase “Old Stock Canadians” and what do we have. A clear campaign to create division and intolerance based on religious and ethnic differences. Now some on twitter have accused me of being a sensationalist, hypocrite, party hack. I don’t belong to a political party nor do I support one leader over the other at this point with the exception of Mr. Harper ,whom I don not support at all. Others have said this is all driven by the media. This is rubbish plan and simple. It was The PM who has continued to bring these issues out during the election campaign again and again. it is the CPC party who puts out mailings like this: 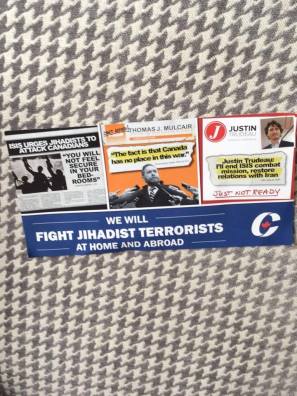 So to blame the media is at best simplistic and at worst and clear act of deception. The CPC can only look to itself for the attention this continues to generate in this election because it is they who continually bring it up in interviews.

We have seen in newspaper articles in Ontario and Quebec a rise in attacks on Muslim women who are wearing Niqab’s . We have seen pominent Muslim Canadians say in interviews that there is a real fear in their communities. We have seen in London a clear racial hatred displayed against Muslim candidates. And the Prime Minister of this country has created the environment where these acts and this fear is fanned. To suggest that the Conservative Party is not to blame is either blind partisanship at any cost or is an unwillingness to confront the actions of their leaders. Either way it cannot be simply rationalized away as a few bad apples, complex issues, or media/partisanship bias. There is a clear pattern here and it is one of them vs. us with the CPC pointing to muslim immigrants as them. it is unrcontionable in our country in the 21st century.

Benjamin Franklin , The American President and slave owner, said “All, too, will bear in mind this sacred principle, that though the will of the majority is in all cases to prevail, that will to be rightful must be reasonable; that the minority possess their equal rights, which equal law must protect, and to violate would be oppression.” . We have now in our great country of Canada an approach and laws that have created fear, inequality and oppression. This must not stand or be rationalized but must be expunged for what it is.  A cynical calculation of fear and division.