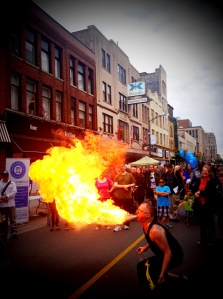 In the debate about whether we should build a performing arts centre or not, there are some questions that need to be asked about its need and its purpose that seem to be glossed over. Before we go there, I need to fill you in a little about my background. I am here to confess that i worked as an arts professional for 17 years. Yes, it’s true friends, there is no denying that I was an artist. I have been a director, artistic director, theatre company founder and educator at the post secondary level. I have worked in opera, touring shows, music and I have given talks and performances for money. So I have some experience and an informed point of view about the power and perils of the arts.

Let’s start with the fact that in 2012 Culture brought in more than $500 million in GDP to London. Culture includes digital, libraries, education, sports, visual arts, written arts, radio, television, film, heritage, arts and heritage administrators and of course, the traditional performing arts. According to the Canada Council for the Arts there are “609,000 people, or 3.3% of the active population of Canada” employed as culture workers in Canada. A measly 257,000 people are employed by Canadian banks. In Ontario, according to a study by Hill Strategies Research, based upon the 2006 census, “With 56,900 artists, Ontario has nearly twice as many artists as any other province.” According to the Cultural Profile for London in 2011, there were 7,703 cultural jobs in the City of London. So culture is a powerful force for economic, social and cultural development in our country and province. So why then would I have questions about a performing arts centre with all this as proof about the benefit of investing in the arts?

Well friends, in order to understand my concerns we need to look around us and understand the lay of the land. We are two hours from Toronto with its wealth of big venue arts offerings. We are 40 minutes from one of the finest theatre festivals in the world in Stratford. We are two hours away from another world-class big venue theatre festival – The Shaw Festival in Niagara-on-the-Lake. Also, when we look at our friends in Kitchener-Waterloo, Mississauga and other Ontario municipalities, we see many performing arts centres, each one costing those municipalities millions. So are we investing in this huge project because we need to keep up with the Joneses? Are we feeling inferior to Stratford or Toronto or Niagara and want to build this centre because “we’re as good as those places?”

In listening to the presentation by Murray Faulkner to the Investment and Economic Prosperity Committee, he talked almost exclusively about music and little about any of the other performing arts. He talked about creating a hot-desking /co-working space. He talked about creating a black box space for dance and music as well as for community meetings. But in this presentation, and in all the talk about creating this performing arts centre, there are some key things that are not talked about that need to be. Like how can a community group afford to rent this space? How do new and emerging talents access use of this space? Isn’t this space, in building hot desks,  competing with other proposed or existing spaces like The Shared Space for Social Innovation or Hackerstudios or Kowork? Why does the only focus seem to be music? Aren’t there other performing arts like dance and theatre? How exactly are they to be included?

So you have some idea of the current costs of renting space for performance space, The McManus Theatre, the small theatre with 150 seats in the lower level of the Grand, charges $450/day for commercial use and $125/day for non-profits plus fees of about $20/hr for the technician. The main stage at the Grand costs $2,000/day. So how exactly are community organizations supposed to afford to use this proposed new performing arts space?

The City of London’s current culture funding is $3 million for 2014. This includes everything from Museums to historical sites, Orchestra London, The Grand , The London Public Library, festivals and  a tiny part for individual artists. London receives $2,470 per assessed property as its portion of the municipal property tax and of this culture receives $20.31. Of note, the City of Windsor, which has had a harder time economically than London, in 2011 spent $3.86 per capita on culture as opposed to London’s $3.41 and Kitchener-Waterloo’s $4.75. So we could afford to invest more in culture in London given the benefits it brings in talent attraction and rotations, economic development and the return on investment. But it’s where we spend that I have a few suggestions and they do not include a new performing arts centre.

Large arts organizations are primarily programming for an older audience nationally, provincially and locally. This is unsustainable and in order for culture to be relevant to a new demographic we have to have a conversation that develops programming that is relevant to Gen X and Gen Y. In order to do that, we must create opportunities for emerging artists and culture workers to develop their craft and the spaces in which to do this. I suggest that if we want to seriously invest in culture in London, we should invest in the following:

If you took half of the proposed ask for the performing arts centre and used it in these areas, the result for London culture would be transformative and lasting and would be a huge boost to attracting and retaining talent and increasing opportunities for economic development. We  should be concerned about creating venues and spaces like Toronto, Stratford, Shaw, or Kitchener-Waterloo, until we create the infrastructure to support and develop our local cultural talent here in London.

So no, I do not want to see spending on a huge performing arts centre. i want to see it spent on new and emerging talent and on the institutions that can support their growth and development.  Any city can build a building, but not many are committed to creating a new, dynamic and growing culture scene. If Council is serious about modelling ourselves on places like Austin and South by South West then this is where we need to spend. Not on another outdated and overextended idea of what culture used to be in the 70s.

1 thought on “Keeping up with the Joneses: Culture in London”